Trades that SHOULD happen

This move makes too much sense. According to ESPN reports, Tom Thibodeau is looking to reunite with Derrick Rose in Minnesota. The Timberwolves have been one of the biggest disappointments of the season thus far. They have an abundance of talent on their roster, yet they can’t seem to find a ways to win games. Ricky Rubio has very quietly been made the scapegoat here. Rubio has been criticized and is averaging a career-low in assists. The Timberwolves are one of the worst 3pt-shooting teams in the league and Rubio is a pass-first point-guard. Derrick Rose isn’t exactly much of an upgrade from Rubio, especially on the defensive end. On offense however, he offers much more than Rubio and adds the scoring which they at the position with Zach LaVine out for the rest of the season. Derrick Rose would most likely be the short-term answer, as the Timberwolves see Kris Dunn as their future starting point-guard. For the Knicks, Rubio would be the pass-first point-guard which Kristaps Porzingis would love to play with and more impor
tantly would get him and other shooters such as Courtney Lee and Carmelo Anthony (if he remains in New York) better looks. 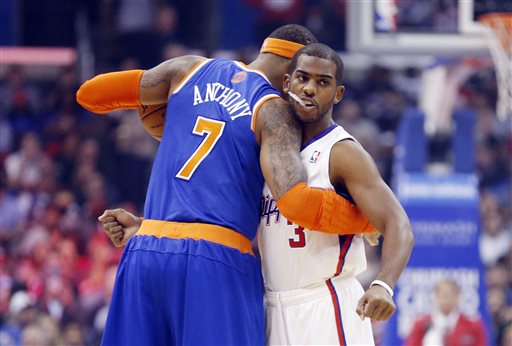 The Knicks just need to bottom-out and rebuild. This team is currently going nowhere fast and the Knicks chances of winning with Carmelo are over. What the New York Knicks need to accept is that they aren’t going to receive a better offer for Carmelo Anthony than this. Anthony is an aging star who plays minimal defence. Austin Rivers has proven that he can be a good bench-scorer and can lead a second-unit and they could try and eventually flip that first round-pick for future assets. The most important thing for the Knicks is to build around Kristaps Porzingis. For the Clippers, they simply must pull the trigger on this trade if they want to compete with Golden State. If they are able to keep JJ Redick, who has matured into a solid defender as well as being one of the best spot-up shooters in the league, the Clippers could make a serious play-off run. Chris Paul-JJ Redick-Carmelo Anthony-Blake Griffin-DeAndre Jordan might be the best starting five in the NBA.

The Boston Celtics wield the assets necessary to get Larry Bird thinking about a potential deal. Plus, Paul George can and will become a free agent in 2018 (player option), at which point the Pacers might lose him for nothing. The two Brooklyn Nets selections (2017 is a swap) are way better than nothing. Both should fall in the top seven overall, and this years will most likely be in the top three. Either of them could end up yielding another star-calibre talent. Jae Crowder won’t come close to replacing George, but he has a great contract for his production level and won’t have the option of leaving Indiana until 2020. He has also drastically improved his three-point stroke and can defend almost every
position. The Pacers would be lucky to have him. Boston needn’t justify its interest in
George. Avery Bradley, Al Horford, Isaiah Thomas and Marcus Smart are ready to win now players. There isn’t time to wait y
ears for inbound prospects to polish their skills. George gives the Celtics another superstar who, like Horford, slides seamlessly into their on-court setup. The retention of Brown here would be huge, since his ceiling should rival peak-Crowder.

Washington Wizards have expressed interest in Shabazz Muhammed, who will be a restricted free agent this offseason. The Wizards need another shooter along with Bradley Beal and Otto Porter in their rotation, which would help space the floor for John Wall to attack the rim. After a slow start to the season, the Wizards look like they could be one piece away from making a deep playoff run. The In Bojan Bogdanovic the Timberwolves would be getting a reliable scorer off-the-bench, who is also has an expiring contract. For the Brooklyn Nets, they need all the draft picks they can get after trading away their first-rounders for the next two years to the Boston Celtics. Worst trade of all-time?

The Thunder are reportedly going hard after Nuggets forward Wilson Chandler. The 6-8 three/four combo would be a great help to either team, but the question is whether they can come up with a package attractive enough for Denver to pull the trigger. Chandler gives OKC a small forward who can score the basketball, which they need to play alongside Roberson who does not offer much on the offensive side. He would fit nicely as a scorer and floor-spacer alongside Westbrook and Steven Adams.

Trades that SHOULD NOT happen

Melo is certainly as good, maybe better than Kevin Love, but for the Cavaliers, Love does some things for them I don’t think Melo could. Kevin Love is a great rebounder, and they’re not a big team as it is. He also stretches the floor in a way Melo wouldn’t. Even though Melo can shoot the 3 pretty close to Kevin Love, he’s not going to plant himself at the 3-point line for 80 percent of the possessions and be satisfied. He’s going to inch in, inch in, just out of instinct, into the mid-range, and it potential messes up the spacing. The Cavs would have to play differently, like completely differently in my view, with Melo. Finally, Love is a very good passer. Not that Melo can’t pass, but Love specifically with the outlet passes. A mid-season trade for Carmelo Anthony does not give them much time to integrate him into the offence. 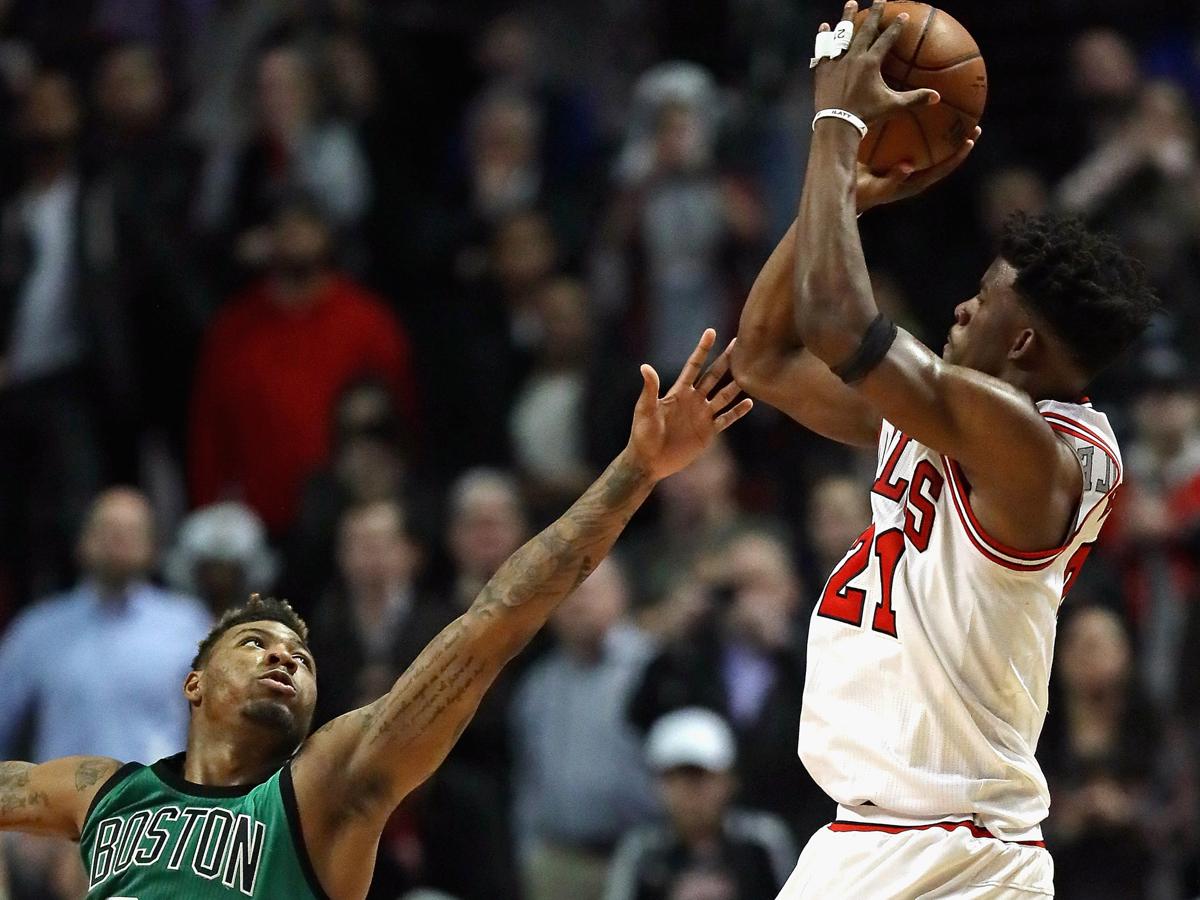 As a Boston Celtics fan, I have gone back-and-forth with this trade for a few weeks. Jimmy Butler is a star. He’s a great defender, he can finish at the rim and has proved on many occasions that he can come through in clutch situations. However, the main reason I don’t like this trade for the Celtics, is his pairing with Isaiah Thomas. Jimmy Butler is having the best season of his career, because he is not playing with Derrick Rose, a ball-dominant scoring point-guard, similar to Isaiah Thomas. The Celtics currently sit at 37-20, having missed one of their best players, Avery Bradley (who plays the same position as Butler) for 21 games. Losing Jae Crowder would be huge, Crowder has played great on both ends of the floor this season and is the emotional leader of the team. And with the Brooklyn pick looking like it is going to be a top 3 pick, I wouldn’t pull the trigger.

Another trade I would turn down if I am the Celtics. Carme 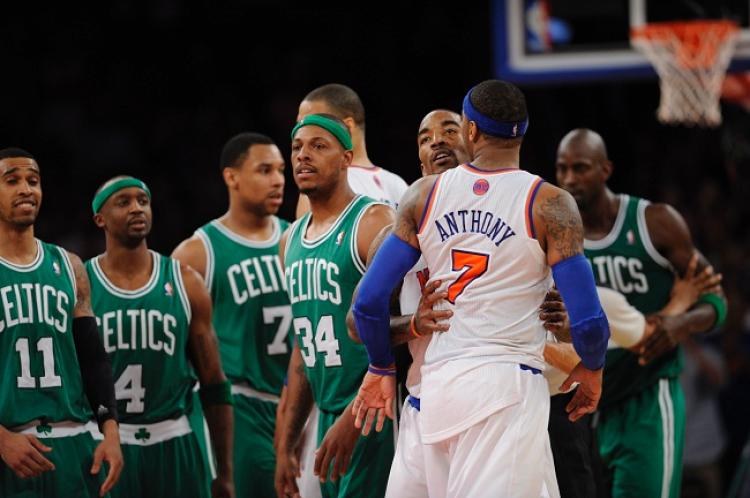 lo Anthony would bring a different dimension to the Celtics game. Although he is in the latter years of his prime, Anthony is still one of the best scorers in the league. However, I just don’t like the fit of Melo with the Celtics. Isaiah Thomas has shown everyone this season that he can be the
isolation-scorer that the C’s have been looking for since Paul Pierce. If you have watched the Celtics this season, it’s pretty obvious to see the strength of their offence is their ball-movement. For as good as Carmelo Anthony is on offence, when the ball gets to him, it usually stops and he’s going to create his own shot. The Celtics now have that guy in Isaiah Thomas.